On the (bumpy) road to build a 3D printer

When the craze with the quadcopter drones started, of course I wanted one, so I bought a few (cheap) parts to learn how they work and played aroud with building one. I’ve never finished the project, because…. I don’t know… I „postponed it”.

Now, in the middle of the craze with 3D printers, naturally, I wanted one as well. I can’t afford one, mostly because I’m not willing to spend that much on something that I’ll not use so often.

So I’ve started searching for scraps. I’ve managed to get my hands on 3 stepper motors (KH42JM2) from 3 copy machine scanners and I’ve started playing with them. I had a lot of recovered electronics, so I wanted to use those for learning, before I’d buy dedicated ICs. I don’t know electronics very well, so I figured this would be another great opportunity to learn.

I’ve done some (not enough) research on how 3D printers work, found the RepRap project. I figured a 3D Delta printer would be more stable with scrap components. Perhaps, I’ll be able to print replacement parts with the first prototype. 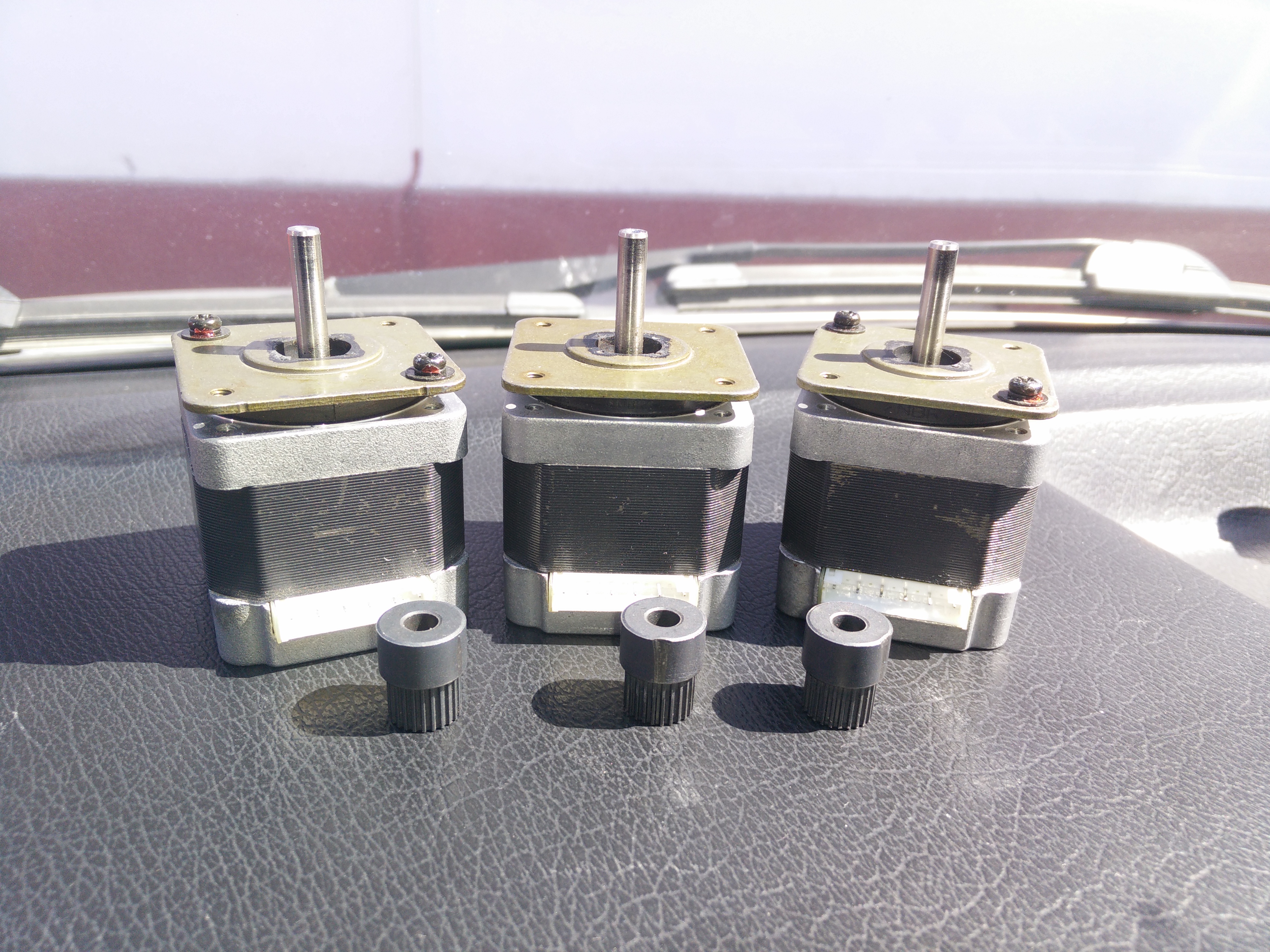 Some friends helped me with some basic electronics to get the stepper working with Arduino (schematic here, code and Fritzing project here), and that was the start. After a long break, because I couldn’t remove the gears from the motors, another friend, Călin Brandabur from Symme3D, helped me and took them off.

Usually when weekend comes I’m tired of sitting in front of computers, and I try to do something physical, that’s why I did not research this enough before building the following, and I just went with my gut.

I’ve started working this weekend on a prototype leg for the printer. I took a thick wood board and cut from it 2 blocks. Those are to be the holders at the top and bottom of the leg. their dimensions were not measured, I just looked for them to be straight (ish), so that they can stay flat on the table.

I drilled 2 holes 7cm apart in each and hot glued in them the 2, 1m log, 8mm in diameter, aluminum pipes (from Dedeman), onto which I’ve placed 2 in-line bearings (from eBay). 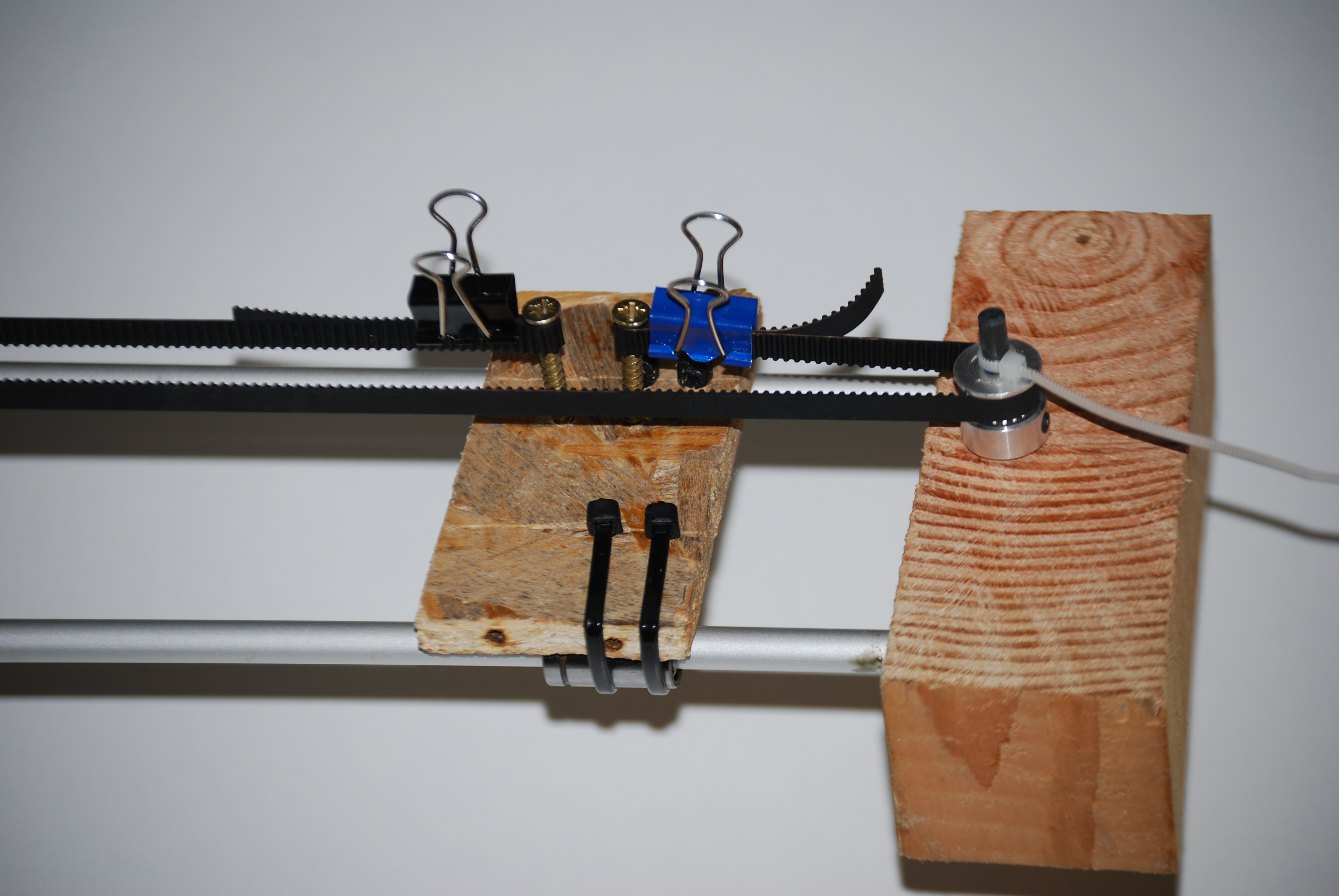 With 2 pairs of zip ties, I’ve secured small piece of OSB onto the bearings. Drilled 2 holes where the belt would come and hotglued 2 screws in (because I used the wrong drill bit to pre-drill the screw holes).

In the top block of wood I drilled a hole, and hot glued a drill bit in to serve as a shaft for the top gear. I secured the gear on the shaft with a small zip tie.

On the bottom block of wood I attached a stepper motor using the original screw plate, and stuck on it a piece of foam to protect it if I drop the moving part. 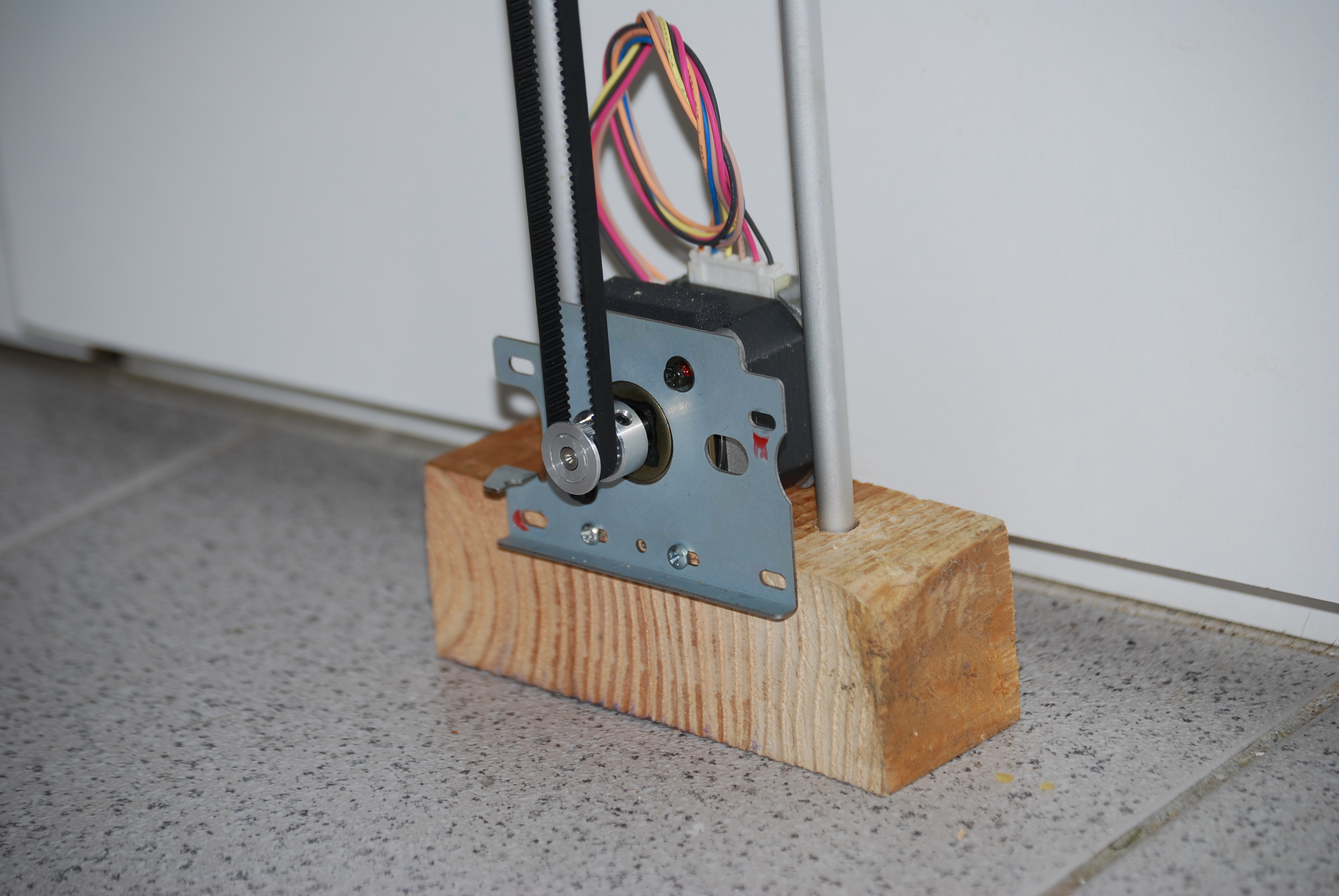 I’ve stretched the belt around the gears and fixed it on the moving part (I need to find the names of these parts) on the screws with a pair of paper binder clips.

Now onto the electronics.

First I’ve soldered a set of male pins on the original motor cable, for better prototyping, and used heat-shrink tubes to isolate each wire. Again I used LEDs for a visual effect, to show the motor steps. I’ve used just the components I had, so for the buttons, I put some resistors in series, to (almost) match the needed resistance (10kOhm). 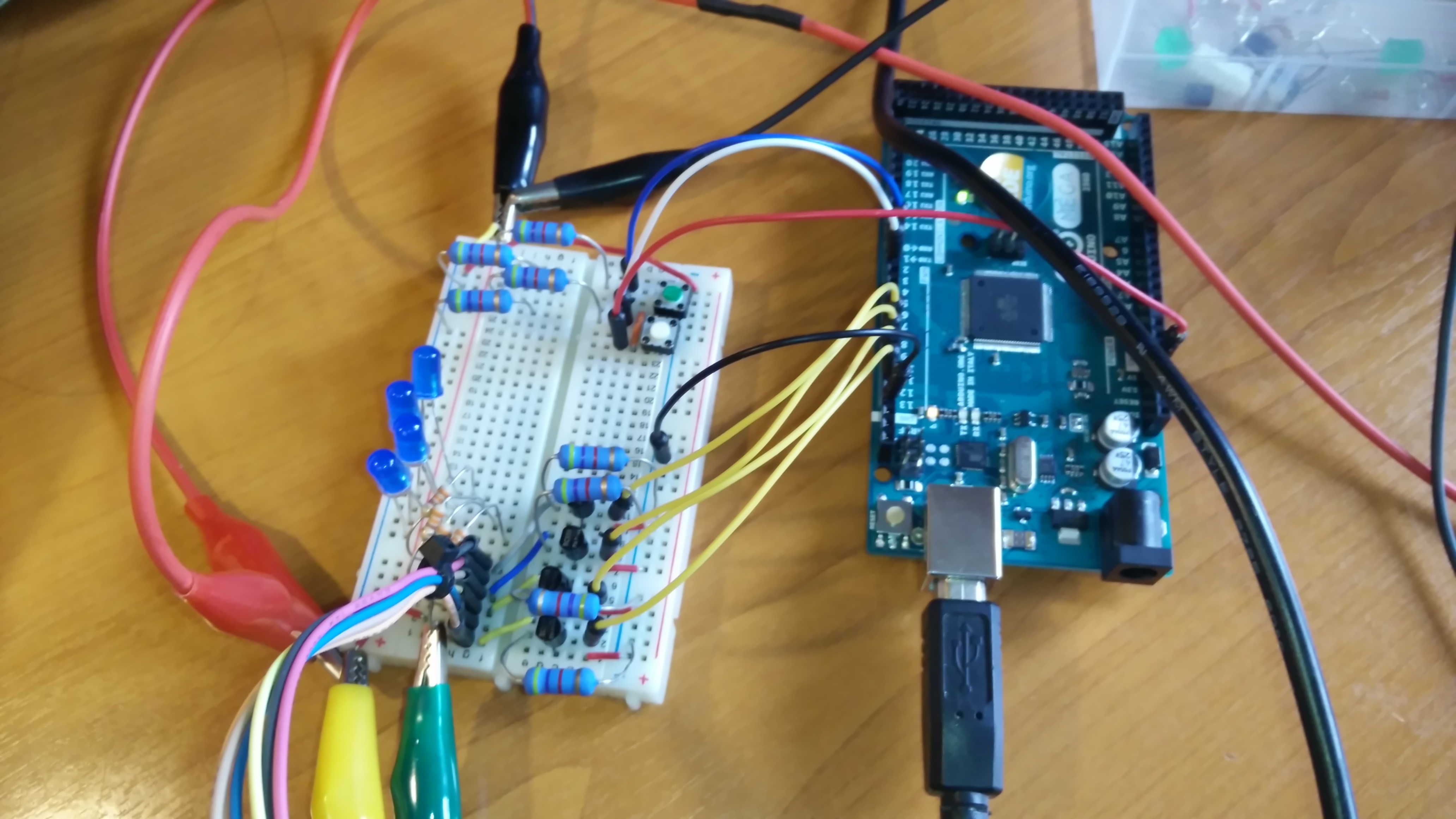 Based on the previous experiment, I’ve adapted it for the Arduino Mega and added 2 buttons to control the direction. (schematic here, code and Fritizing project here) I’ve also improved my schematic drawing skills and usage of Fritzing, thanks to the awesome community from Element14.

And I gave it a spin:

According to the motor datasheet, the motor should get between 3,42 and 9,25 V (I don’t know which model of those I have). With my current setup, it only gets a max of 250 mV. Because of this, if I stand up the prototype, gravity will allow the moving part come down, but stop it from going up. So I need to understand why this is happening, why are the transistors putting up such a big resistance, and how can I solve it. I’ll try to solve it with the recovered electronics I have, but if I won’t be able, I’ll look into buying some new parts. I’m cheap I know, but I want to learn, not get ready made parts and don’t understand their internals.

I’ll also need to find a way and see if I can use less pins to control the motor. I’m using an Arduino Mega now, and I have more pins, but still…

I should also look into some security, and protect my Arduino and my motor, in case I do something stupid.

I also need to find out if it’s best to use these motors for this in bipolar or unipolar mode.

Any advice from someone with experience?